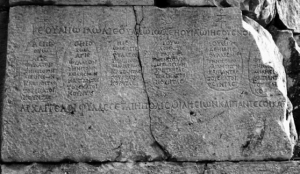 The Jewish Diaspora in the Roman Empire. Diaspora, Social Agents and Social Networks: Towards the Creation of a New Analytical Toolkit

During the Hellenistic and Roman period, Jewish communities spread over a wide geographical area spanning from Italy to Babylon, and in all the areas under the influence of Rome. Traces of these diasporic communities are so enormous in quantity and varied in quality, and they comprise such a long time-span, that they call for subtle analyses. In the past decade the use of novel perspectives and interdisciplinary approaches has brought the focus on to social agents and the networks they created, far from a traditional narrative which presents socio-cultural choices for diasporic communities as a simplistic dichotomy: resistance to an alien environment or assimilation. Evidence acknowledging the existence of different social agents and socio-cultural ties shows that social networks provided the skeleton on which Jewish culture evolved and spread, as well as the framework in which to form local communities that were not isolated, but shared social and cultural traits with, and had multiple ties to, non-Jewish groups that existed in the same context. This article argues in favour of the need for adequate theoretical tools to analyse such complex phenomena.