Dealing with the Legacies of Fascist Italy and Nazi Germany (Ex Novo Vol. 5) 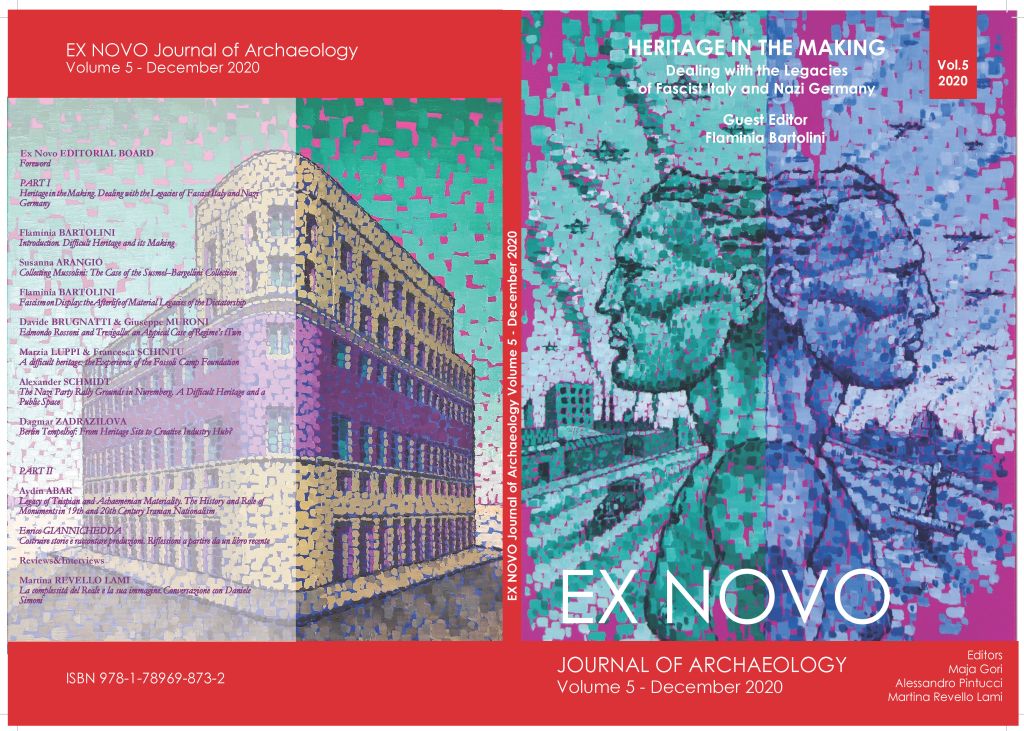 The fifth volume of Ex Novo has the pleasure to host Flaminia Bartolini as guest editor for the special issue titled Heritage in the Making. Dealing with Legacies of Fascist Italy and Nazi Germany.  This collection of peer-reviewed papers stems in part from the successful workshop held at McDonald Institute for Archaeological Research, University of Cambridge in December 2018 under the aegis of the DAAD-Cambridge Hub. The event gathered several international heritage experts and professionals from both Germany and Italy to explore the complexities of handling Heritage related to Fascism and National Socialism.

The selection of papers edited by Flaminia Bartolini contribute much to the debate on the shifting conditions of the reception of dictatorial regimes, and more specifically the fate of fascist material legacies from the aftermath of WWII to the present day. Over the last decade, critical heritage studies have highlighted the role of dictatorship in different historical and social realms. Fascist Italy and Nazi Germany, and broadly military regimes of the twentieth century, have often been pivotal in the creation of consensus through propagandistic reinterpretation of the past.

The second part of this volume includes an additional contribution by Abar Aydin which keeps in with the broad theme of political reappropriation of the past lying at the core of Bartolini’s collection of papers but strays away from their geographical focus by extending the analysis to the exploitation of Achaemenian material legacies in reinforcing nationalist narratives in 19th and 20th Iran.The final section of this issue features an in-depth analysis by Enrico Giannichedda on the relationship between craft production and the development of language and storytelling skills. The recent book by historian Michele Cometa Perchè le storie ci aiutano a vivere provides the starting point for Giannichedda’s insightful reflections. Martina Revello Lami’s conversation with the author of the front and back cover closes the 2020 issue. It is now an established tradition for Ex Novo to host great artworks, but this year we launched an open call to select original creations inspired to the theme of the volume. The visionary reinterpretation of rationalist architecture proposed by Daniele Simoni beat off the competition, and his paintings Occasione mancata and La torre became the impactful front and back-cover of Ex Novo 2020.

Heritage in the Making. Dealing with the Legacies of Fascist Italy and Nazi Germany, edited by Flaminia Bartolini

Susanna ARANGIO- Collecting Mussolini: The Case of the Susmel–Bargellini Collection

Flaminia BARTOLINI – Fascism on Display. The Afterlife of Material Legacies of the Dictatorship

Alexander SCHMIDT- The Nazi Party Rally Grounds in Nuremberg. A Difficult Heritage and a Public Space

Aydin ABAR – Legacy of Teispian and Achaemenian Materiality. The History and the Role of Monuments in 19th – 21st Century Iranian Nationalism