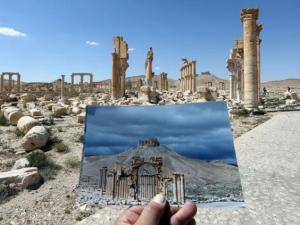 (by Nour A. Munawar)

Reconstructing Cultural Heritage in Conflict Zones: Should Palmyra be

Cultural heritage has fallen under the threat of being of damaged and/or erased due to armed conflicts, and destruction has increasingly become a major part of daily news all over the world. The destruction of cultural heritage has escalated in Syria as the ongoing armed conflict has spread to World Heritage Sites, such as Palmyra and the old city of Aleppo. The devastation of Syria’s war has deliberately and systematically targeted archaeological monuments dating from the prehistoric, Byzantine, Roman, and Islamic periods, with no distinction being made of the cultural, historical, and socio-economic significance of such sites. The violence of this conflict is not, of course, limited to the destruction of cultural property, and has first and foremost served to introduce non-state radical actors, such as Daesh, who targeted local people, archaeological site, museum staff and facilities.

Nour A. Munawar (University of Amsterdam)