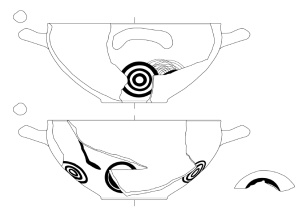 In the previous century, ancient migration was explained on the basis of the occurrence and quantities of imported archaeological artefacts, and with interpretations made in alignment with the ancient written sources. This was so too with the Greek migration into Southern Italy, often referred to as ‘Greek colonization’. This paper will focus on the relations between indigenous peoples and Greek newcomers in Southern Italy, taking the Sibaritide area as its focal point, as well as on the methods for identifying these foreign newcomers through the analyses of the archaeological record. From the end of the ninth century BCE, a Euboean-Levantine presence is detectable in the Western Mediterranean, including Northern Africa, Spain and Italy. In the first half of the eighth century BC in the Sibaritide, a Greek-indigenous coexistence emerged in the settlement of Timpone della Motta. This coexistence entailed a shared and mixed cultural framework at the site, which is reflected in the local pottery production. Based on the study of the ceramic technology, this paper seeks to shed light on the possibilities and limitations of technological analysis for identifying migration features in the archaeological record.