Practices, Representations and Meanings Of Human Mobility in Archaeology

Every society experiences movement. As a structural component of human behavior and human mind, movement necessarily influences ways of thinking, relations of people to space, time, tradition, the organization of societies, and also modifies the perception of things and human relations to them. Mobility has been a focus of archaeological study since the field began. Key topics around movement throughout archaeology’s history as a discipline have included, but are not limited to: migration and diffusion; invasion, conquest, and imperial imposition; colonialism; trade and the movement of goods, people, and animals; seafaring and its associated technologies; and nomadism. Especially following the processual turn, scholars minimized movement, instead placing major emphasis on identity theories and its inherent mutability. As a result, despite decades of research into the nature of mobility by anthropologists, sociologists and geographers along with the fundamental contributions of hard sciences (e.g. ceramic provenience studies, isotope analysis, aDNA studies), much archaeological debate seems still to revolve around two polarizing positions, those using movement as all-in-one explanatory device, and those that downgrade its role as active agent in triggering change.

To break the deadlock between mobilist and immobilist theories, archaeology should adopt mobility as an encompassing and more open concept, as already advocated by neighboring disciplines– chiefly anthropology, cultural studies, human geography, and sociology– that have highlighted the great variability of historical and modern types of movements. Modern scenarios cannot be directly transposed onto pre-industrialized periods, however their study has allowed us to significantly deepen our understanding of human mobility, breaking down foggy categories such as: demic diffusion and ethnic groups’ migrations into more specialized forms of mobility, and more specifically transhumance, exogamous mobility, trade, town-hinterland migration, raiding or forced migrations. Each of these forms of mobility operates within and is determined by its specific social, historical and environmental context.

In this sense, human geographers have developed many ways of studying contemporary mobility, focusing on flows and networks of connections, on hybrid geographies of human/nonhuman interactions (Whatmore 2002). As Cresswell  (2010: 19, 21) pointed out, mobility “involves a fragile entanglement of movement, representations, and practices.” It is the fact of physically getting from one place to another, the different meanings all sorts of movements take on, and, finally, “the experienced and embodied practice of movement”. In practice these components of mobility are not easy to untangle, and different forms of mobility research are likely to explore various facets of any number of these. For instance, positivist analysis has provided a wealth of models for measuring and mapping the material displacement of things and people, yet tracing physical movement is just one aspect of mobility. Likewise, social theory based approaches have crafted a multitude of narratives around mobility, alternatively representing it as freedom, as progress, as fundamental to modern

Western citizenship, while also treating it as a dramatic, as un-ethical, as forced.

Mobilities have, thus, a physical reality, they are encoded socially and culturally and are experienced through practice. Importantly, these three aspects of mobility are political and have implications for the production and reproduction of power relations. In this respect, archaeology holds a privileged position. As opposed to other scholars focusing on movement in modern times, archaeologists may provide a way of comprehending not only the interrelationship between physical movement, representations, and mobile practices, but more significantly how the nature of such interrelationships vary across time and context. In other words, by providing a view from the past, archaeology may enable us to understand the “different ways in which mobility has been regulated in different times and places, how this reflects political and social structure, and how differential access to voluntary movement—as well as forced movement through human trafficking, persecution, etc.—takes on symbolic import through the narratives a society develops” (Beaudry & Parno 2013).

It has been abundantly demonstrated that theories and paradigms in the humanities are influenced by historical, economic and socio-cultural conditions. Modern nation states, established along with the discipline, have profoundly influenced archaeology’s representation of migration, which was mostly conceived as the study of the movement of large and homogenous population groups, whose identity was represented as ethnically characterized. Within archaeology, the present-day shift of attention from collective to individual agency and the countless facets of migration goes hand in hand with new political scenarios such as the extraordinary migratory flows into Europe, shifting boundaries, alternative forms of citizenship and identity, and the emergence of emotive reactionism.

What place do and should archaeologists have in the debate on migration? How self-reflective have we been about the pasts that we choose to research, and about how we represent them?

The third issue of Ex Novo will host multidisciplinary theory-based contributions seeking to test and reassess the centrality of mobility studies to understand patterns of change and continuity in past and modern worlds; reconsider the movement of people, objects, and ideas alongside mobile epistemologies, such as intellectual, scholarly or educative traditions, rituals, practices, religions and theologies; and provide insights into the multifaceted relationship between mobile practices and their shared meanings and how they are represented socially and politically.

In addition to contributions focusing on Mobility, also papers addressing topics in line with the areas of interest of Ex Novo will be included: politics and archaeology, public archaeology, the legacies of colonialism and nationalism within the discipline, the articulation between local and global archaeological traditions, the discipline’s involvement in memory and identity, museum studies and restitution issues. 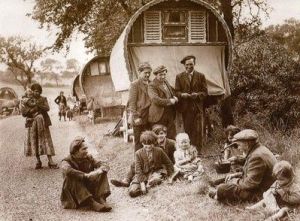 “Of course we immigrants wanna sing all night long. Don’t you know the singing salves the troubled soul?”