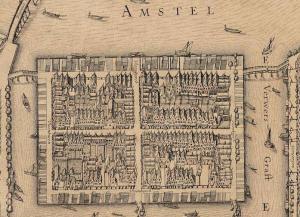 During urban expansions around 1600 a new neighborhood, Vlooienburg, was created in the rapidly growing city of Amsterdam. This new district was not just inhabited by local people, but also by immigrants coming from different European countries. Among those immigrants there were Sephardic Jewish people, who had fled from the Iberian Peninsula due to the persecution perpetrated by the Spanish Inquisition. By studying the archaeological finds that have been recovered from cesspits at Vlooienburg, an attempt is made to gain more knowledge about the composition of different cultural, religious and social identities living together in this area. As a part of the study of the material culture from Vlooienburg, this paper will present a case study that explores the possible relationships between the mobility of Portuguese ceramics and the presence of Portuguese immigrants. The paper will examine the distribution of different Portuguese wares to establish whether there were significant differences in how these ceramics were acquired and used within seventeenth century households in Amsterdam. The main result of this study is the remarkable link between Portuguese coarse cooking wares and the presence of immigrant households.

Previous Post: A Road to Fīrūzābād
Next Post: From war material culture to popular heritage, and beyond